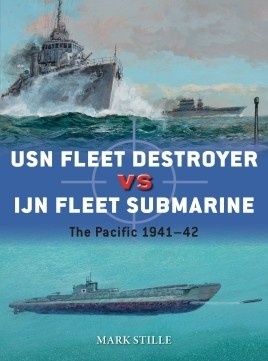 Leading up to the Pacific War, Japanese naval strategists believed that a decisive fleet engagement would be fought against the United States Navy. Outnumbered by the USN, the Imperial Japanese Navy planned to use its large, ocean-going submarines to chip away at its opponent before the grand battle. In order to accomplish this, the IJN's submarine force was tasked to perform extended reconnaissance of the USN's battle fleet, even in port, and then shadow and attack it.

For their part, the USN was fully aware of the potential threat posed by Japanese submarines, and destroyer crews were trained and equipped with modern anti-submarine weapons and tactics to screen the battle fleet.

Challenging the assumption that Japanese submarines were ineffective during the Pacific War, this fully illustrated study examines their encounters with the US Navy, and the successes and failures of American destroyers in protecting their capital ships.