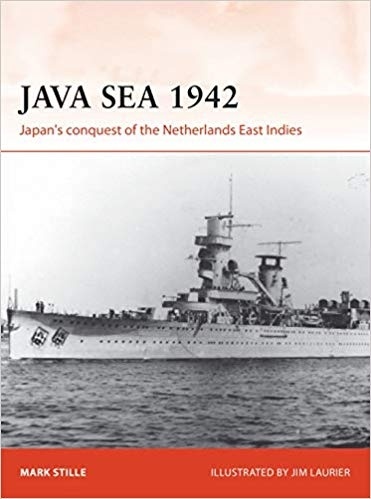 The battle of the Java Sea, fought in February 1942, was the first major surface engagement of the Pacific War and one of the few naval battles of the entire war fought to a decisive victory. It was the culminating point of the Japanese drive to occupy the Netherlands East Indies (NEI) and, to defend the territory, the Allies assembled a striking force comprised of Dutch, American, British and even an Australian ship, all under the command of a resolute Dutch admiral.
On 27 February 1942, the Allied striking force set course to intercept the Japanese invasion force in the Java Sea. In one of the few such times during the whole of World War II a protracted surface engagement was fought unmolested by airpower. For over seven hours, the Allied force attempted to attack the Japanese invasion force, finally breaking off in the early evening. Some three hours later, the Allied force, now reduced to just four remaining cruisers and two destroyers, attempted another attack on the invasion convoy during which Japanese torpedoes scored heavily, sinking two Dutch cruisers and bringing the battle to a conclusion. Over the next two days, as the Allies attempted to flee, five more ships were sunk. From that point on, Allied naval power was eliminated from Southeast Asia.
In this illustrated title, Mark Stille tells the full story of the battle of the Java Sea, explaining how and why the Japanese achieved such a resounding victory, and delving into the tremendous impact of the battle on the course of the Pacific War.