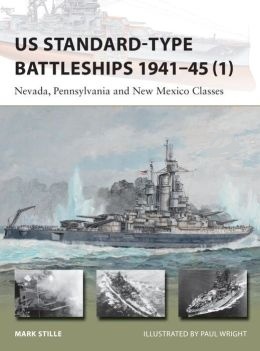 Written by US Navy expert Mark Stille, this book offers a unique insight into the Standard-type classes of US battleships in World War II. It provides a detailed investigation into the histories of each of the individual vessels of the Standard-type battleship class, the first three of which, the Nevada, Pennsylvania and New Mexico, formed the US Navy's main force in the inter-war period. The Standard-types reflected a new design philosophy: by designing each class to meet common standards of maneuverability and handling, vessels of different classes could operate as a single tactical unit without being limited by the performance of the slowest and least maneuvrable ship. At the time of their construction, these ships incorporated the latest design features such as triple gun turrets. Although they were rendered increasingly obsolete by evolving naval doctrines and the ascendance of the fast battleship, they served with distinction throughout World War II in both the Pacific and the Atlantic. This study combines analysis of design features and an absorbing narrative of operational histories to offer a comprehensive picture of the Standard- type battleships, from the brutal destruction of the USS Arizona to the triumphant occupation of Japan.