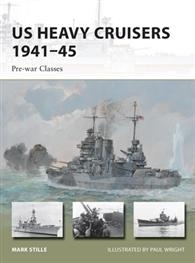 Designed and produced under the regulations of the Washington Naval Treaty, the heavy cruisers of the Pensacola, Northampton, Portland, New Orleans and Wichita classes were exercises in compromise. While they possessed very heavy armament  the Pensacolas, for example, carrying a main battery of ten 8 guns  this came at the cost of protection  armor was the same thickness as a gun cruiser, and incapable of protecting the vessels from enemy 8 fire. As the classes evolved, these flaws began to be corrected, with the main battery being reduced, and increased protection being added to the vital areas of the ship. Despite these drawbacks, the pre-war heavy cruiser classes served with distinction throughout World War II.