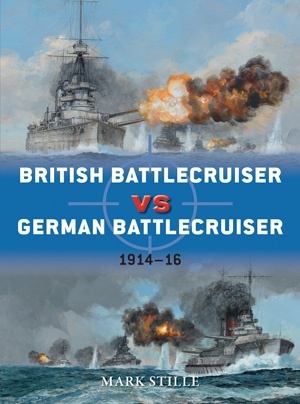 Fast-moving and formidably armed, the battlecruisers of the British and German navies first encountered one another in 1915 at Dogger Bank and in the following year clashed near Jutland in the biggest battleship action of all time. In the decade before World War I Britain and Germany were locked in a naval arms race that saw the advent of first the revolutionary dreadnought, the powerful, fast-moving battleship that rendered earlier designs obsolete, and then an entirely new kind of vessel - the battlecruiser. The brainchild of the visionary British admiral John 'Jacky' Fisher, the battlecruiser was designed to operate at long range in 'flying squadrons', using its superior speed and powerful armament to hunt, outmanoeuvre and destroy any opponent. The penalty paid to reach higher speeds was a relative lack of armour, but Fisher believed that 'speed equals protection'. By 1914 the British had ten battlecruisers in service and they proved their worth when two battlecruisers, Invincible and Inflexible, sank the German armoured cruisers Scharnhorst and Gneisenau off the Falklands in December 1914.

Based on a divergent design philosophy that emphasised protection over firepower, the Germans' battlecruisers numbered six by January 1915, when the rival battlecruisers first clashed at Dogger Bank in the North Sea. By this time the British battlecruisers had been given a new role - to locate the enemy fleet. Five British battlecruisers accompanied by other vessels intercepted and pursued a German force including three battlecruisers; although the battle was a British tactical victory with neither side losing any of its battlecruisers, the differences in the designs of the British and German ships were already apparent. The two sides responded very differently to this first clash; while the Germans improved their ammunition-handling procedures to lessen the risk of disabling explosions, the British drew the opposite lesson and stockpiled ammunition in an effort to improve their rate of fire, rendering their battlecruisers more vulnerable. The British also failed to improve the quality of their ammunition, which had often failed to penetrate the German ships' armour.

These differences were highlighted more starkly during the battle of Jutland in May 1916. Of the nine British battlecruisers committed, three were destroyed, all by their German counterparts. Five German battlecruisers were present, and of these, only one was sunk and the remainder damaged. The limitations of some of the British battlecruisers' fire-control systems, range-finders and ammunition quality were made clear; the Germans not only found the range more quickly, but spread their fire more effectively, and the German battlecruisers' superior protection meant that despite being severely mauled, all but one were able to evade the British fleet at the close of the battle. British communication was poor, with British crews relying on ship-to-ship flag and lamp signals even though wireless communication was available. Even so, both sides claimed victory and the controversy continues to this day.