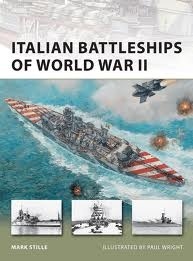 Often overlooked as a naval power of WWII, Italy's Regia Marina was, upon the declaration of war against France, the fourth largest navy in the world. Despite its numbers, the Italian fleet was made up of largely obsolete vessels, none being equipped with radar, and had a reputation for having inadequately-trained crews. Added to these drawbacks, the Italian commanders did not enjoy the discretion of command at sea that their counterparts in the service of other nations did, being directed closely by the Supermarina (Italian Naval Headquarters). Despite these obstacles, and the heavy losses inflicted upon the fleet by the Royal Navy while in harbour at Taranto, the battleships of the Italian Navy enjoyed a good reputation for being well-designed, and served with courage and determination at Punto Stilo/Calabria, Sirte, Cape Spartivento, and Cape Matapan. Mark Stille details, with the aid of many stunning photographs, including several from the Italian Navy's own archives, the battleships of one of the forgotten navies of WWII.