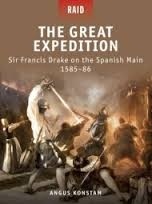 In 1585, war between Spain and Elizabethan England was all but inevitable. Consequently, Queen Elizabeth's spymaster proposed a pre-emptive strike designed to paralyse Spain's economy by striking at the Spanish Main - the heart of her overseas empire. The Elizabethan "Sea Dog" Sir Francis Drake was selected to lead this all-important raid.

During the summer of 1585 an expedition was gathered in Plymouth - an impressive force of 21 ships and 1,800 soldiers and sailors. When word reached Plymouth that the Queen was having second thoughts and might call off the raid, Drake hurriedly put to sea, before his expedition could be recalled. After first attacking the Canary Islands, he finally made landfall in the Caribbean just before Christmas 1585, and he headed straight for Santo Domingo, the oldest Spanish city in the New World, and the capital of the island of Hispaniola.

Drake was soon master of the city, which he held to ransom before sailing off towards his new destination - the treasure port of Cartagena. Cartagena was where emeralds and gold were gathered for shipment to Spain, and so Drake hoped for rich pickings. Despite being heavily outnumbered, Drake landed his soldiers, who stormed the city and won a spectacular victory. Cartagena was plundered, then held to ransom before Drake set sail again, the holds of his ships filled with Spanish treasure. Unable to raid the heavily defended city of Havana he instead raided the little Spanish colony on the coast of Florida after which he finally returned home. Drake's daring raids had finally resulted in the outbreak of the long-expected war and it would be the last action of its kind for some years as England sought to protect herself against invasion and the Spanish invasion.