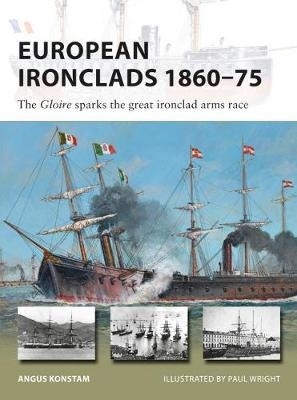 From Spain to Russia, and from Ottoman Turkey to Bismarck's Prussia, this book explores 15 years that transformed European naval warfare.

When the Gloire slid down the Toulon slipway in 1859, it changed sea power forever. With this ship, the world's first oceangoing ironclad, France had a warship that could sink any other, and which was proof against the guns of any wooden ship afloat. Instantly, an arms race began between the great navies of Europe - first to build their own ironclads, and then to surpass each other's technology and designs.

As both armour and gun technology rapidly improved, naval architects found new ways to mount and protect guns. The ram briefly came back into fashion, and Italian and Austro-Hungarian fleets fought the ironclad era's great battle at Lissa. By the end of this revolutionary period, the modern battleship was becoming recognizable, and new naval powers were emerging to dominate Europe's waters.