Mutiny on the Spanish Main : HMS Hermione and the Royal Navy's revenge 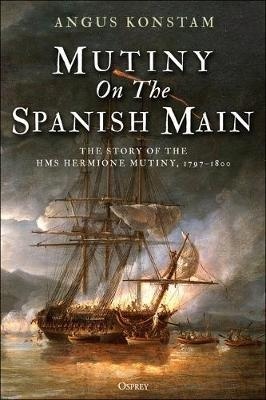 Mutiny on the Spanish Main : HMS Hermione and the Royal Navy's revenge

The true story of one of the most notorious mutinies in naval history, which provided inspiration for Patrick O'Brian's Aubrey-Maturin and C.S. Forester's Hornblower novels.

In 1797 the 32-gun Royal Navy frigate HMS Hermione was serving in the Caribbean, at the forefront of Britain's bitter sea war against Spain and Revolutionary France. Its commander, the sadistic and mercurial Captain Hugh Pigot ruled through terror, flogging his men mercilessly and pushing them beyond the limits of human endurance. On the night of 21 September 1797, past breaking point and drunk on stolen rum, the crew rebelled, slaughtering Pigot and nine of his officers in the bloodiest mutiny in the history of the Royal Navy. Handing the ship over to the Spanish, the crew fled, sparking a manhunt that would last a decade. Seeking to wipe clean this stain on its name, the Royal Navy pursued the traitorous mutineers relentlessly, hunting them across the globe, and, in 1801, seized the chance to recover its lost ship in one of the most daring raids of the Age of Fighting Sail. Anchored in a heavily fortified Venezuelan harbour, the Hermione - now known as the Santa Cecilia - was retaken in a bold night-time action, stolen out from under the Spanish guns. Back in British hands, the Hermione was renamed once more - its new identity a stark warning to would-be mutineers: Retribution.

Drawing on letters, reports, ships' logs, and memoirs of the period, as well as previously unpublished Spanish sources, Angus Konstam intertwines extensive research with a fast-paced but balanced account to create a fascinating retelling of one of the most notorious events in the history of the Royal Navy, and its extraordinary, wide-ranging aftermath.