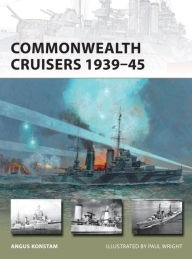 In the early 20th century Britain's largest colonies established their own small naval presence, and their ships fought alongside the Royal Navy during World War I. These fleets were expanded slightly during the inter-war years, and in 1939 the Royal Australian Navy, the Royal Canadian Navy and the Royal New Zealand Navy willingly joined the fight on behalf of the British Commonwealth. For the most part these small navies consisted of a few cruisers and destroyers, designed to protect territorial waters and to protect local sea lanes. However, these warships and their crews soon found themselves involved in a global war, and consequently were called upon to fight wherever they were needed, against the Germans, the Italians and the Japanese. At the start of the war the Royal Australian Navy was the largest of these Commonwealth navies, but the problems of supplying its wartime needs from the far side of the world hindered its expansion. From late 1941 it also found itself fighting a very different war from the British, and found itself working closely with the US Navy to contain the Japanese in the Pacific. Here it was supported by the smaller Royal New Zealand Navy - while both of these Commonwealth fleets had fought with distinction in the Atlantic and the Mediterranean, it was in the Pacific Theater that they would make their mark. Geography meant that the Royal Canadian Navy was thrust into the forefront of the Battle of the Atlantic, and while its fleet expanded rapidly during the war, its sailors also earned a reputation for commitment, professionalism and cheerfulness which helped overcome many of the tribulations of this gruelling naval campaign. The RCN ended the war as the largest of these three Commonwealth fleets. This book tells the story of these small cruiser forces, and the men who served the Allied cause so well during the long and brutal war at sea.