North Cape 1943 : The Sinking of the Scharnhorst 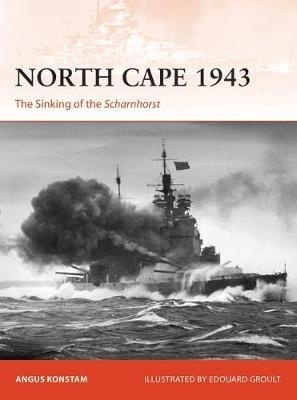 North Cape 1943 : The Sinking of the Scharnhorst

The German battleship Scharnhorst had a reputation for being a lucky ship. Early in the war she fought off a British battlecruiser and sunk a carrier, before carrying out two successful forays into the Atlantic. In the spring of 1943, the Scharnhorst was redeployed to Norway. There, working in concert with other German warships such as the battleship Tirpitz, she posed a major threat to the Arctic convoys - the Allied sea lifeline to Russia. Her presence, alongside Tirpitz, forced the British to tie down ships in Arctic waters.

When Tirpitz was put out of action, and Hitler demanded naval support for the war in Russia, the crew of the Scharnhorst under Rear-Admiral Bey, had to act. In late December 1943, she put to sea, her target an Allied convoy passing through the Barents Sea on its way to Murmansk. Unknown to Bey, the British were using the convoy as bait to draw the Scharnhorst into battle. What followed was a two-day running battle fought in rough seas and near-perpetual darkness, ending with the destruction of the Scharnhorst and all but 36 of her crew, ending any serious German naval threat to the Arctic convoy lifeline.

In this illustrated study, leading naval historian Angus Konstam offers a fascinating new insight into this key engagement. He combines expert analysis with his unique knack for storytelling to offer a fascinating new perspective on the battle which sank the Scharnhorst