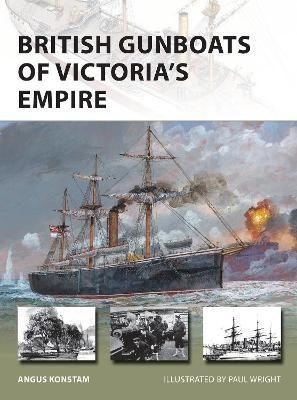 A beautifully illustrated history of the iconic ocean-going gunboats of British 'gunboat diplomacy', the hundreds of little warships that for 50 years demonstrated the power of the Royal Navy worldwide, and which maintained and enforced the rule of the British Empire at its peak.

In recent years the phrase 'gunboat diplomacy' has been used to describe the crude use of naval power to bully or coerce a weaker nation. During the reign of Queen Victoria, 'gunboat diplomacy' was viewed very differently. It was the use of a very limited naval force to encourage global stability and to protect British overseas trade. This very subtle use of naval power was a vital cornerstone of the Pax Britannica. Between the Crimean War (1854-56) and 1904, when the gunboat era came to an abrupt end, the Royal Navy's ocean-going gunboats underpinned Britain's position as a global power and fulfilled the country's role as a 'global policeman'.

Created during the Crimean War, these gunboats first saw action in China. However, they were also used to hunt down pirates in the coasts and rivers of Borneo and Malaya, to quell insurrections and revolts in the Caribbean or hunt slavers off the African coast. The first gunboats were designed for service in the Crimean War, but during the 1860s a new generation of ships began entering service - vessels designed specifically to fulfill this global policing role. Better-designed gunboats followed, but by the 1880s, the need for them was waning . The axe finally fell in 1904 when Admiral 'Jackie' Fisher brought the gunboat era to an end in order to help fund the new age of the dreadnought.

This exciting New Vanguard title describes the rise and fall of the gunboat, the appearance and capability of these vital warships, and what life was like on board. It also examines key actions they were involved in.