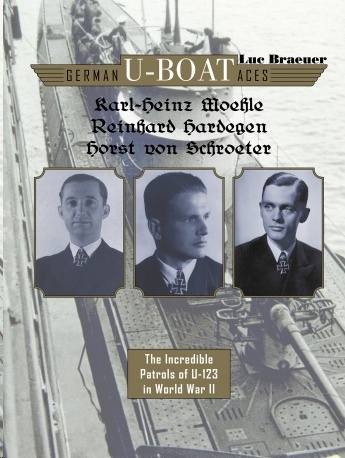 This unique volume in the U-boat Aces series features the three German naval captainsKarl-Heinz Moehle, Reinhard Hardegen, and Horst von Schroeterwho commanded the U-123, a type IXB U-boat. In 12 patrols and 720 days at sea during its four-year WWII combat career, U-123 sank an incredible 44 Allied merchant and warships, ranking it with the third-most U-boat sinkings. Moehle, the first commander of U-123, successfully conducted three patrols in the North Atlantic and was awarded the Knights Cross. Hardegen sank the first ship in US waters and was eventually awarded the Oak Leaves to his Knights Cross. Schroeter, appointed U-123s commander in June 1942, also received the Knights Cross after four combat patrols. All 12 of U-123s combat patrols are discussed in detail, as well as its participation in the wartime propaganda film U-boats Westward! The rare photography featured comes from the German U-boat archive in Cuxhaven, as well as from former crew members.