The Decoys "A tale of three Atlantic convoys 1942" 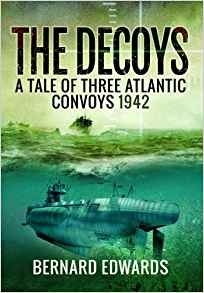 The Decoys "A tale of three Atlantic convoys 1942"

In November 1942, Britain and America launched Operation TORCH, the ambitious invasion of French North African colonies of Morocco and Algeria. To convey 70,000 troops and their equipment required 350 merchant ships crossing the U-boat infested North Atlantic from the USA and 250 more sailing south from British ports. The need for a high level of protection for these meant withdrawing large numbers of escorts from the routine trade convoys. Amongst those left without adequate defence were RB 1 and SC 107, both eastbound from America, and SL 125, northbound from Freetown. All three were at sea at the same time as the TORCH convoys. Predictably, Admiral Donitz threw the full weight of his 140 Atlantic U-boat fleet against the now vulnerable trade convoys, which between them lost thirty-one ships and 792 men. While this unprecedented massacre was in progress, the troop-carrying convoys slipped miraculously through entirely without incident. There is nothing on record to say that RB 1, SC 107 and SL 125 were sacrificed to ensure the safe passage of the TORCH convoys but this superbly researched book sets out to examine the truth behind the rumors.