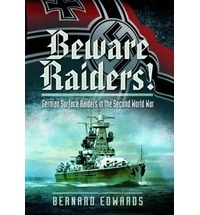 This is the fascinating story of two German surface raiders and the havoc they caused amongst Allied shipping in World War II. One was the 8-inch gun cruiser Admiral Hipper, fast, powerful and Navy-manned: the other a converted merchantman, Hansa Line's Kandelfels armed with a few old 5.9s manned largely by reservists, and sailing under the nom de guerre of Pinguin. Contrary to all expectations, the amateur man-of-war reaped a rich harvest and went out in a blaze of glory. Her purpose-built sister, on the other hand, was hard-pressed even to make her mark on the war and ended her days in ignominy. The author emphasises the striking contrast between the conduct of Ernst Kruder, captain of the Pinguin, whose concern it was to cause as little loss of life as possible, and the callous Captain Meisel of the Admiral Hipper, who has scant regard for the lives of the men whose ships he had sunk. Captain Edwards describes in detail Kruder's most audacious coup, the capture, rather than the sinking, of the entire Norwegian Antarctic whaling fleet, which he calls '"a disaster of major proportions". Equally disastrous was the havoc wreaked upon convoys HG53 and SLS 64 by the Admiral Hipper in the North Atlantic in February 1941.