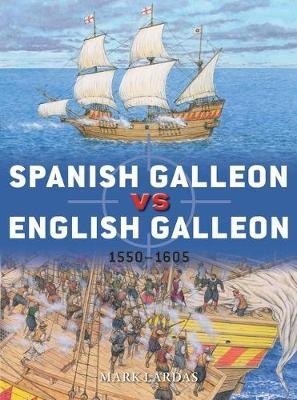 Between 1550-1600, Europe witnessed a rapid evolution in the art of ship design which enabled safer and more efficient transatlantic travel. This was the pinnacle of the Age of Discovery and Exploration for the European powers, in which the galleon played a crucial role. Galleons were both the main vessels in maritime commerce and the principal warships used by the opposing fleets throughout the Age of Exploration. This period also saw a large amount of naval combat, much of it between individual ships belonging to the competing powers of England and Spain as they sought to control and exploit the rich mineral, material, agricultural and human resources of the New World.

The conflict between the English Sea Dogs and the Spanish Adventurers has been a source of fascination for over four centuries. This exciting addition to the Duel series explores how the galleons used by Spain and England were built and armed, and examines the effectiveness of the cannon they used. It also compares how they were sailed and manoeuvred, showing the strengths and weaknesses of each design, and explaining how these played out in several of their most prominent battles, including the Battle of San Juan de Ulua, the fight between the Golden Hind and the Nuestra Senora de la Concepcion, an action from the Spanish Armada, and the last fight of the Revenge.