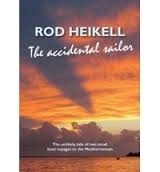 In 1976 Rod Heikell set off for the Mediterranean in Roulette, a 20 foot boat that should probably have never left the sheltered waters of the Solent. Via the French Canals and Biscay he somehow got there and sailed to Corsica, Italy and on to Greece. This book records the near disasters, and highs and lows of a voyage which shaped his life in ways he never imagined. He became the accidental sailor and developed a life-long love of sailing and exploring the seas. In 1987 he took Rozinante, a Mirror Offshore 18, down the Danube, behind the Iron Curtain to the Black Sea and Aegean, probably the longest voyages one of these tubby little craft has made. These were simple voyages on small yachts with minimal equipment that shaped what Rod
was to do in ways he never envisaged. 'It's a mystery, an accident' he is fond of saying when asked how it all started.
Rod has gone on to write yachting guides to many of the Mediterranean countries, on the Indian Ocean and on routes and landfalls around the world. His latest book, The Trade Wind Foodie is on food, a subject dear to his stomach.