Sea combat "from world war I to the present day" 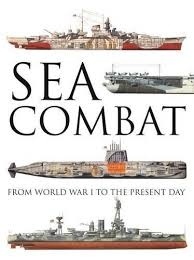 Sea combat "from world war I to the present day"

Naval warfare  and the weapons used to conduct it  has changed greatly since World War I. Sea battles are no longer dominated by large battleships, but by even larger aircraft carriers. Ships have been relegated to floating missile platforms.

Containing full-color artworks and action photographs, Sea Combat is a comprehensive guide to how the ships, submarines and naval weapons that have been developed since the outbreak of World War I have fought their battles. All of the best known naval encounters are described, from the battle of Jutland to the sinking of the Bismarck, the battle of Midway, the Cold War standoff, the sinking of the Belgrano, and the attack on the USS Cole. Sea Combat is an authoritative guide to the tactics and stratagems used on the high seas from 1914 to the present day.