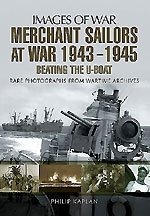 The Battle of the Atlantic was the dominating factor all through the war. Never for one moment could we forget that everything happening elsewhere, on land, at sea, or in the air, depended ultimately on its outcome. - Winston Churchill

Featured in this new volume from Philip Kaplan are images of some of the most iconic and important merchant ships of the latter years of the Second World War, along with intriguing shots of the men who sailed and worked on them. The indomitable HMS Sackville, the only surviving corvette of the Second World War, is afforded particularly prominent coverage, alongside a host of lesser-known but equally formidable ships.

The Corvettes (vessels that escorted convoys throughout the war) were amongst the wettest and most uncomfortable of all warships, and their crews were undoubtedly amongst the most heroic. This volume is, in effect, a photo essay on the corvette. Escorting the convoy system of defensive Allied boats in the Atlantic and tasked with preventing merchant ships from being sunk by German submarines and U-boats, the Corvette's job was invaluable.

This history, told in words and images, is sure to appeal to all military and maritime enthusiasts, representing an exciting addition to the established Images of War series.