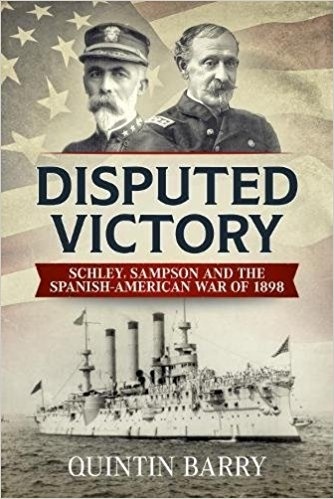 In 1898 the United States went to war with Spain over the future of Cuba. The American navy had, in the preceding decade, been revived after years of neglect, and was much stronger than anything that the Spanish could bring against it. In the Philippines, Admiral George Dewey easily destroyed a weak Spanish squadron. A military invasion of Cuba was supported by the rest of the US Navy, under the command of Admiral William T Sampson. An important part of this force was the Flying Squadron, led by Commodore Winfield Scott Schley. Meanwhile a Spanish squadron under Admiral Pascual Cervera sailed from Europe to the Caribbean and, after disappearing for some days, reached the port of Santiago de Cuba. Schley was the first on the scene; his movements were later to be severely criticized. When Sampson arrived with the rest of the fleet, a blockade of the port was instituted. In the end, Cervera was obliged to make an attempt to break out, but his squadron of four cruisers was overwhelmed and destroyed. During the battle on Sunday July 3, Schley was in effective command, as Sampson had gone ashore to confer with the army commander. Although the Americans had won another easy victory, a bitter dispute arose between the respective supporters of Schley and Sampson as to who was entitled to the credit. Fanned by the popular press, the issue split the U S Navy to the point where its morale was seriously affected. Matters came to a head with the publication of a book violently attacking Schleys conduct. He demanded a Court of Inquiry; this sat for forty days at the Washington Navy Yard, presided over by Admiral Dewey. It was one of the great trials of American history, as the lawyers refought the campaign in minute detail. In the end, the verdict went against Schley, though this was offset by a minority opinion from Dewey that he had indeed been in command and deserved the credit for the victory. This book explores the rights and wrongs of the conduct of those principally involved in a battle that marked the dawn of the American empire, and closely examines the dramatic proceedings of the Court of Inquiry.