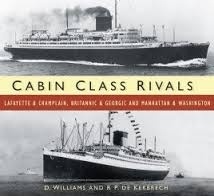 During the late 1920s and early 1930s three pairs of unique and innovative passenger liners emerged from France, the UK and the US designated as cabin-class liners: the Lafayette and Champlain, Britannic and Georgic and the Manhattan and Washington - three steamships and three motorships. Born at the height of the Great Depression and constructed at a time when there was much work needed in the shipbuilding and allied trades, they were overshadowed by the larger, more luxurious express liners on the prestigious North Atlantic route. Their introduction made incursions into the Atlantic passenger traffic, with spacious accommodation and sumptuous public rooms, in effect offering first-class travel in relative luxury at much lower fares and at a longer, slower crossing time. Much overlooked by historians, their impact on the style and standards for Atlantic travel were trendsetting and challenged the major passenger liner companies to re-think their strategies. Here, David L. Williams and Richard P. de Kerbrech have examined the part played by these cabin-class rivals and highlight their rightful place in the history and development of North Atlantic steam - and motor - navigation.