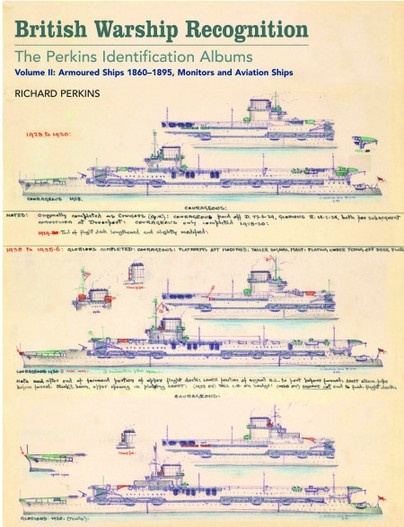 The Richard Perkins warship identification albums form one of the most detailed studies ever undertaken of the changes to the appearance of Royal Navy ships. However, it is a unique hand-drawn manuscript artefact in the care of the National Maritime Museum, so despite its value it is rarely seen by anyone besides the museums curators, for whom it is a precious resource, used on an almost daily basis.
In collaboration with the Museum, Seaforth is undertaking the first publication of this monumental work in a superbly produced multi-volume edition that captures all the qualities of the original. Every page is reproduced at full size, making the extensive hand-written annotation readable, while the fine-line drawings retain all the colours that Perkins used to denote appearance differences and alterations.
Following the Museums binding arrangement, this second volume of the series covers armoured ships from Warrior to the Royal Sovereigns (all later capital ships from the Majestic class onwards can be found in Volume I), as well as monitors and seaplane and aircraft carriers.
This is a publishing event of the utmost importance for every enthusiast and ship modeller, who for the first time will be able to own a copy of a unique and invaluable reference work.