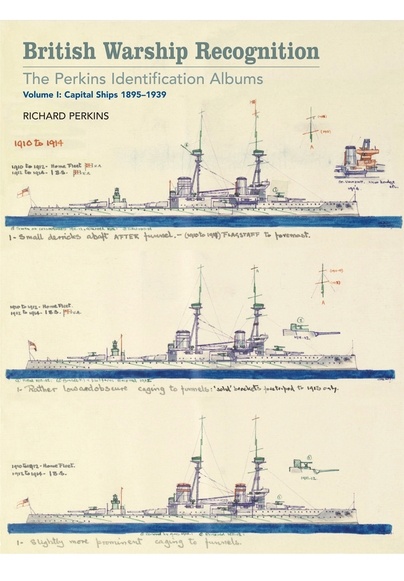 In the inter-war years Richard Perkins, a keen amateur photographer and avid collector, amassed one of the worlds largest personal collections of warship negatives. This he eventually bequeathed to the National Maritime Museum, where it still forms the core of the historic photos naval section. While he was actively acquiring photos, he found that many were neither identified nor accurately dated, so he began to compile an album of his own drawings, which incorporated as much detail as possible on individual ships that could be amended as he discovered more information. His main concentration was on features differentiating ships of the same class and, wherever possible, precisely dating alterations to their appearance, all portrayed in exquisite multi-coloured annotated line drawings.
This project grew into an enormous resource covering virtually every Royal Navy ship from 1860 to 1939, when security restrictions forced Perkins to stop work. This material was also donated to the NMM, where it was bound into eight large folio volumes that became a key reference for the curators of historic photos, but unknown and almost inaccessible to the interested public. This makes this first publication an event of the utmost importance for every enthusiast and ship modeller  it reproduces all the drawings at full size and in colour, and will eventually form a multi-volume set of unique reference value.