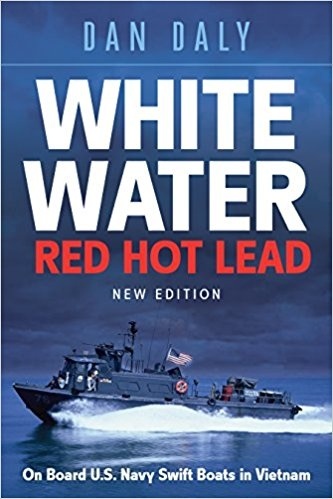 During the Vietnam war 3500 officers and men served in the Swift Boat program in a fleet of 130 boats with no armor plating. The boats patrolled the coast and rivers of South Vietnam, with the average age of the crew being twenty-four. Their days consisted of deadly combat, intense lightning firefights, storms and many hidden dangers.

This action-packed story of combat written by Dan Daly, a Vietnam combat veteran who was the Officer in Charge of PCF 76 makes you part of the Swift Boat crew. The six man crew of PCF 76 were volunteers from all over the United States, eager to serve their country in a unique type of duty not seen since the PT boats of WWII. This inexperienced and disparate group of men would meld into a combat team - a team that formed an unbreakable, lifelong bond.

After training they were plunged into a 12-month tour of duty. Combat took place in the closest confines imaginable, where the enemy were hidden behind a passing sand dune or a single sniper could be concealed in an onshore bunker. In many cases the rivers became so narrow there was barely room to maneuver or turn around. The only way out might be into a deadly ambush.

Dan Daly received his naval commission after graduation from Harvard College. After 18 months on a Navy destroyer, he volunteered for Swift Boat duty. After training, he and his crew served 12 months in Vietnam, 196768. He later founded several consulting firms and lives on Cape Cod with his family.