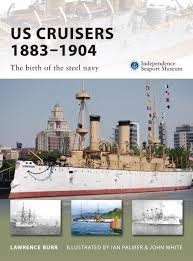 At the end of the Civil War the US Navy was the most technologically advanced navy in the world, but after the war this spirit of innovation faded and America's naval might dwindled. However, in the 1880s a "New Navy" was born and at the forefront of its fleet were the mighty cruisers. Lawrence Burr details how it was these cruisers that allowed America to once again display its power on the world's oceans. Exploring how the birth of this "Steel Navy" required the development of new shipbuilding, motive power, ordnance, and armour-plate production capability, he details the design and development of these ships.

Intricate colour artwork illuminates the technicalities of the design, especially their internal workings through a cutaway of the USS Olympia, which has been restored and is now on public display. This title also places these technological advances in context, through vivid accounts of how US cruisers were fundamental to the Spanish-American War of 1898, destroying the Spanish fleet at the battles of Manila Bay and Santiago. It was their performance at these engagements that marked the emergence of the US Navy as a major naval power, and America as a world power.