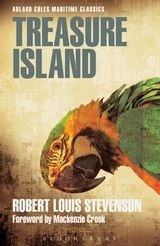 When old drunken sailor Billy Bones dies at the Admiral Benbow Inn, the innkeeper's son Jim Hawkins finds a map amongst his possessions. The local physician, Doctor Livesey, and the squire, Trelawney, believe the map is of an island where the infamous pirate Captain Flint buried his treasure. They decide to buy a ship to go and find it, and Jim decides to join the crew as cabin boy.

But also joining Captain Smollett's crew is a one-legged cook with a parrot named Long John Silver. As Jim discovers, Silver is just one of the crew who was also part of Captain Flint's crew, and they're planning a mutiny. After they reach the island and the pirates rise up, Jim is separated from the others loyal to Captain Smollett. He soon learns that they are not alone on the island after all, and that perhaps the treasure has already been found.

Treasure Island has been entertaining readers of all ages for 130 years and it is just as witty and as thrilling today as it was when first published. This special edition includes the much-loved original text, along the map that inspired Stevenson to write the novel. It also features an exclusive Foreword by Pirates of the Caribbean star Mackenzie Crook.