Titanic on trial "the night the Titanic sank" 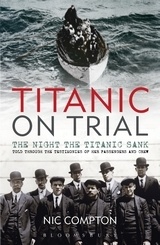 Titanic on trial "the night the Titanic sank"

Capturing the disbelief, the chaos and the terror of the fateful night the Titanic sank 100 years ago, Titanic on Trial brings to life the tragedy through the voices of those who
survived it. Stories about the sinking have become
legendary - how the band played to
the end, how lifeboats were lowered half-empty - but amongst the films,
novels and academic arguments, only those who were there can
separate truth from fiction. This book gives the story back to those people.

After the sinking, inquiries into the loss of 1,517 lives were held in both the UK and US. The 1,000 or more pages of transcripts represent the most thorough and complete account of the
sinking, told in the voices of those who were there. For the first time, these transcripts of the courtroom questions and answers have been specially edited and arranged chronologically, uncovering and drawing out the real drama of
the Titanic's final night. The
witnesses are transformed into characters in a much bigger
story, and the events are described from the perspectives of people in
every part of the ship, from a stoker in the boiler room escaping just before the watertight doors sealed behind him, to first class
passengers trying to buy their way onto lifeboats.