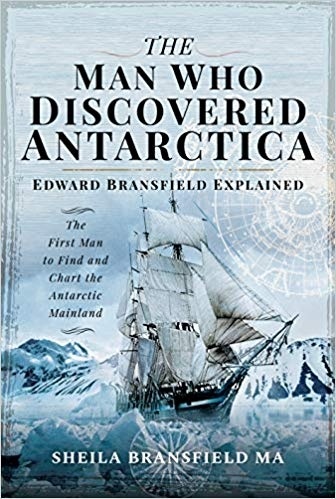 Captain Cook claimed the honour of being the first man to sail into the Antarctic Ocean in 1773, which he then circumnavigated the following year. Cook, though, did not see any land, and he declared that there was no such thing as the Southern Continent. Fifty years later, an Irishman who had been impressed into the Royal Navy at the age of eighteen and risen through the ranks to reach the position of master, proved Cook wrong and discovered and charted parts of the shoreline of Antarctica. He also discovered what is now Elephant Island and Clarence Island, claiming them for the British Crown. Edward Bransfield's varied naval career included taking part in the Bombardment of Algiers in 1816 onboard the 50-gun warship HMS _Severn_. Then, in 1817, he was posted to the Royal Navy's Pacific Squadron off Valpara so in Chile, and it was while serving there that the owner and skipper of an English whaling ship, the _Williams_, was driven south by adverse winds and discovered what came to be known as the South Shetland Islands where Cook had said there was no land. Bransfield's superior officer, Captain Sherriff, decided to investigate this discovery further. He chartered Williams and sent Bransfield with two midshipmen and a ship's surgeon into the Antarctic - and the Irishman sailed into history. Despite his achievements, and many parts of Antarctica and an Antarctic survey vessel being named after him, as well as a Royal Mail commemorative stamp being issued in his name in 2000, the full story of this remarkable man and his historic journey, have never been told - until now. Following decades of research, Sheila Bransfield MA, a member of the UK Antarctic Heritage Trust, has produced the definitive biography of one of Britain's greatest maritime explorers. The book has been endorsed by the UK Antarctic Heritage Trust, whose patron the Princess Royal, has written the Foreword.