The Life and Ship Models of Norman Ough 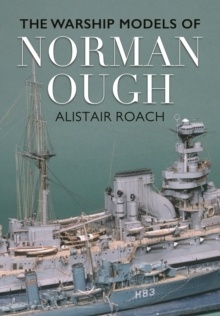 The Life and Ship Models of Norman Ough

Norman Ough is considered by many as simply the greatest ship modeller of the twentieth century and his exquisite drawings and meticulous models have come to be regarded as masterpieces of draughtsmanship, workmanship and realism; more than technically accomplished ship models, they are truly works of art. This new book is both a tribute to his lonely genius and a practical treatise for model shipwrights. Ough lived most of his adult life far from the sea in a flat high above the Charing Cross Road in London, where his frugal existence and total absorption in his work led to hospitalisation on at least two occasions; he was an eccentric in the truest sense but he also became one of the most sought-after masters of his craft. Earl Mountbatten had him model the ships he had served on; his model of HMS Queen Elizabeth was presented to Earl Beatty; film production companies commissioned models for effects in several films. Incorporating many of his original articles from Model Maker Magazine, his detailed line drawings now kept in the Brunel Institute, and photographs of his models held in museums and at Mountbatten's house, this book presents an extraordinary level of practical information as well as an inspiring panorama of perhaps the most perfect warship models ever made; modelmakers, naval enthusiasts and historians will welcome his remarkable insights into the ships of the two World Wars. AUTHOR: Alistair Roach holds an M.Phil. with his research thesis on 'Model Boats in the Context of Maritime History and Archaeology' and he has published articles in The Mariner's Mirror, The International Journal of Nautical Archaeology, Marine Modelling International and Model Boats Magazine. He is a ship modeller himself and brings a practical slant to his writing. Phil Reed is a professional model maker who has built models for clients in North America and Europe. His work also includes restoration projects for leading galleries and museums. After studying Fine Art and Photography he found his true vocation in ship model building, eventually abandoning a teaching career to concentrate full time on his model work. His latest work, 'Building a Miniature Navy Board Model', gives readers a step by step guide to creating these magnificent models.