The Grey Wolves of Eriboll 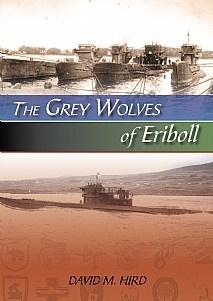 The Grey Wolves of Eriboll

The surrender of the German U-boat fleet at the end of World War II was perhaps the principal event in the war's endgame which signified to the British people that peace really had arrived. It is little known that the majority of the surrenders of U-boats on active west-European sea patrols in May 1945 were supervised in Loch Eriboll, an isolated sea loch on Scotland's far north-westernmost coast

The U-boats were part of Hitler's plan to starve the British Isles of food, raw materials and equipment vital for the prosecution of the war - a plan that failed. With an estimated 160 U-boats on active patrol at the end of the war, it was imperative that these boats were made aware of the capitulation of German armed forces, that they accepted the surrender arrangements and then proceeded, surfaced, to designated British ports.

Loch Eriboll's attraction as the reception port was its isolation and its safe, deep-water anchorage - ideal for the arrival of armed U-boats that might still be intent on one last show of defiance. News of the momentous event was heavily censored - nothing appeared in the local press. Thirty-three U-boats, their officers and men surrendered between 10th and 22nd May 1945. The boats were arrested, boarded and disarmed; in some cases this vital exercise was completed by the simple expedient of lobbing ammunition, explosives and torpedo pistols overboard!

Each U-boat has been positively identified and detailed information provided including contemporary photographs, boat or flotilla emblem, together with the coordinates of where each boat was eventually destroyed in the north Atlantic. However, not all were destroyed by the Allies, some were retained by the British, American, Russian or French navies as spoils of war but the vast majority were lost accidentally or scrapped with the passage of time.

The Grey Wolves of Eriboll includes a wealth of historical insights including the German Surrender Document; detailed descriptions of the construction, service careers and circumstances of each surrendered U-boat; details of the frigates that supervised the surrenders; Operation Deadlight (a hasty plan to ensure the U-boats could not again be used aggressively) and contemporary newspaper reports.

The pivotal role played by Loch Eriboll in ending the U-boat menace is little-known and lesser celebrated - this book rights that wrong.