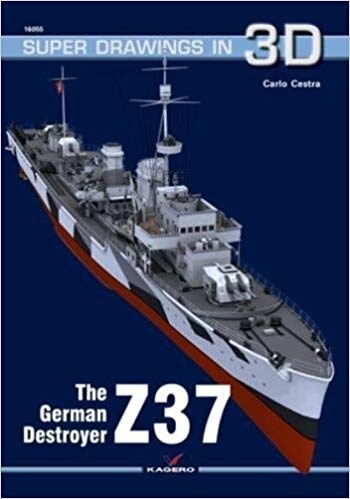 Z37 was a German destroyer built for the Kriegsmarine in Kiel during World War II. She was laid down on 2 January 1941, launched on 24 February 1941, commissioned on 16 July 1942 and became operational in December 1942, though while she was going from Kiel to Swinemünde to work up, she collided with a freighter and had to return to the repair yard.

The post-World War I Reichsmarine continued to use the term torpedo boat for surface warships displacing less than 800 tonnes and carrying torpedoes as their primary armament, and it was not until the first true destroyers were under construction, from 1934 onwards, that the term Zerstörer (destroyer) came into vogue in Germany.

At the outbreak of the Second World War, Nazi Germanys Kriegsmarine had 21 destroyers in service, while another one was just being completed. These 22 vessels, including three classes (Type 34, 34A and 36) had all been built in the 1930s, making them modern vessels, as no destroyers remained in German hands following the close of the First World War. Including that final pre-war vessel, a further 19 were brought into service during the war and more were captured from opposing navies, included the Italian Navy (Regia Marina) after the Italian Armistice with the Allies in 1943.