The Complete Scrimgeour "From Dartmouth to Jutland 1913-16." 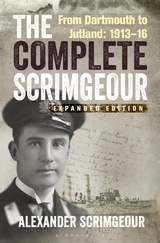 The Complete Scrimgeour "From Dartmouth to Jutland 1913-16."

Rape, Ravage and Rant are the German watchwords in this war. Right, Revenge & Retrenchment shall be ours.' Alexander Scrimgeour, 17th September 1914.

Most published war diaries have been written by those who fought in the trenches but Alexander Scrimgeour was a naval officer who was killed at the Battle of Jutland in 1916 at the age of 19. Despite his tragic early death he had already left a legacy  complete diaries spanning the previous six years, chronicling first his life as the son of a wealthy stockbroker, then his time as a young sea cadet and finally as a Sub-Lieutenant in His Majesty's Navy. Like all good midshipmen were required to do, Scrimgeour took pride in writing his journals and was careful to recount every event with marked sincerity. Appalled by some of the actions of the British Admiralty and the Germans alike, Scrimgeour risked court-martial to record some of the more notorious incidents during World War I, and what really happened.

Among his revelations, Scrimgeour reveals the real reason behind the sinking of the HMS Hawke, the events preceding the capture of the infamous Baron Von Wedel  head of the German Spy Bureau and Privy Councillor to the Kaiser - and what he learned from dining with his Naval Commanders as the ship's interpreter. He chronicles his numerous love affairs and his anguish at the loss of close friends killed during the war.

With thousands of British sailors losing their lives at sea during World War I, it is important to draw on all remaining first hand evidence so that we remember, and never forget the heroic actions of our ancestors during one of our country's darkest episodesthrough the diaries of Alexander Scrimgeour, we can do just that.

This new book includes much previously unseen material, chronicling Scrimgeour's life prior to joining the navy. It is published to coincide with the centenary of the author's death and of the Battle of Jutland.