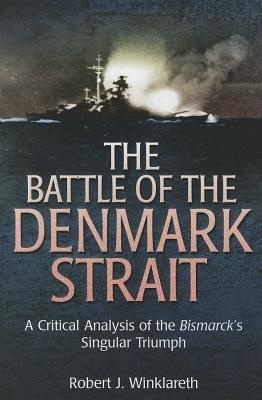 To Great Britain and Germany, the Battle of the Denmark Strait came like a thunderclap in the spring of 1941. The pride of the Royal Navy, HMS Hood, was utterly destroyed, and its newest battleship, Prince of Wales, severely damaged and forced to withdraw. This was at the hands of Germany s huge battleship Bismarck, on its first foray into North Atlantic waters. The blast of heavy shells between the behemoths resonated both in Whitehall and Berlin.However, despite the wealth of documentary information and photographic evidence available on the battle, there continues to be controversy as to how the conflict was actually fought. This book attempts to resolve the remaining issues by a detailed technical analysis of the circumstances, while new discoveries, revealed for the first time in this book, shed new light on the battle in which the best of both navies traded salvoes and over 1,500 Royal Navy sailors were obliterated.By carefully considering the factors affecting naval gunnery, such as flight time of shells to their target, reaction time for correcting the fall of shot, and recycle times of the various gun systems, the battle has been painstakingly reconstructed in this book within all of the established time and distance parameters. Not limited to the battle itself, the book also explores the relevant events leading up to the titanic clash, and those events associated with its aftermath.Being a graduate mechanical engineer and professional analyst associated with fielded military weapon systems, the author is uniquely qualified to perform the analytic functions involved in the reconstruction of the battle. His last position was as staff analyst where he provided support to the Federal government in the evaluation of the U.S. Strategic Missile Defense System, and he is also author of the highly acclaimed work, Naval Shipbuilders of the World From the Age of Sail to the Present Day.REVIEWS ...aficionados of naval engineering and gunnery will particularly find stimulating...features evocative photographs and maps, excellent diagrams and drawings, and a very useful bibliography and reference to key documents from Germany and Britain. ...All in all, this is a most useful perspective..., the book is a worthwhile work that will both inform and stimulate its readers.Naval Historical Foundation The Battle of the Denmark Strait is done justice in this well-written book which reflects Bob Winklareth s background and reputation as a military analyst .a very helpful, thorough contribution to the understanding of the classic Bismarck-Hood drama, worthy of addition to many libraries. Bob Dulin, Retired USN Engineering Duty Officer, Co-Founder of the SNAME Marine Forensics Committee co-author of the classic three-volume World War II Battleships design and operational history, published by the Naval Institute Press. Winklareth presents a comprehensive account of the battle of the Denmark Strait .this well researched book will help any reader interested in the Battle of the Denmark Strait and its cast of characters. Michigan War Studies well illustrated quite readable enthusiasts of the Bismarck and those interested in naval surface warfare episode will find this book worthwhile Naval HistoryThis is a must book for any serious student of naval history. It would be a great addition to any World War II buff. Kepler's Military History goes beyond the minute details of the battle and attempts to understand how the battle fit into the larger picture of global relations, extending years into the past to the resurrections of HMS Hood and the eventual sinking of the notorious Bismarck, and the uncertain future of both German and British warships...provides an excellent account of naval development, expansion, and decline from the era before World War I to after World War II, and of the fates of vessels Prinz Eugen and Rodney, and lasting interest in Bismarck and the battle, as underwater explorers uncover the remnants of the battle thousands of meters below the surface, showing how Battle of Denmark Strait affected world events and continues to affect historical memory.Nautical Research Journal"