Skagerrak. The battle of Jutland through germen eyes 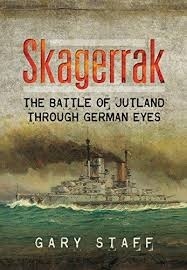 Skagerrak. The battle of Jutland through germen eyes

On 31 May 1916 The German High Seas Fleet clashed with the Royal Navy in the North Sea. The ensuing Battle of Jutland, known to the Germans as the Skaggerak Battle (der Skagerrakschlacht), was the most significant naval action of the First World War. Although not tactically decisive, the strategic result was that British naval supremacy in the North Sea went unchallenged for the rest of the war and the blockade of Germany remained in place.

Many works have dealt with this clash of titans, and many more will doubtless appear for the approaching centenary but the German perspective has been sorely neglected. Gary Staff aims to correct this. By cross-referencing both German and British official records and accounts he has established the most coherent narrative of the battle possible. But the bare bones of the timeline are fleshed out with eyewitness accounts from the crews of the German ships. The result is a gripping read that gives a real sense of the drama, tension and terror of being in battle inside one of these steel behemoths. The thoroughly researched and accessible text is supported by clear maps and a large number of archive photos, many never before published, showing the German vessels before, during and after the action.