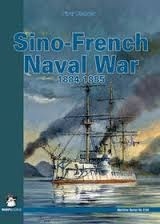 This new book covers the Sino-French Naval War 1884-1885, a little-known part of late 19th century naval history. The background, operations and outcomes are described in detail. All the ships involved, both French and Chinese, are described and illustrated with full technical specifications. Profusely illustrated with scale drawings and photos. REVIEWS recommended to all history buffs and modelers well written, thoroughly illustrated, and a great insight into the history of naval warfare in the late 19th century. IPMS Few realize that bloody battles of 20th-century Indochina arguably originated from obscure 19th-century fighting between France and China Now MMP BOOKS provides those links in Sino-French Naval War 1884-1885. Author Piotr Olender capably charts the conflict's largely coastal and riverine operations from T onkin to Taiwan. And after helpful notes on causes and comparisons, the bulk of the book competently chronicles key actions. I simply couldn't put Sino-French Naval War 1884-1885 down. Connect some historical dots. And brilliantly illumine your Asian conflict studies with this superbly vital volume. Cybermodeler.com "An even handed account, the book makes an excellent short introduction to this largely forgotten war" The NYMAS Review- Summer Fall 2013