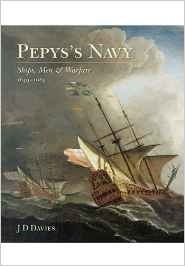 Pepys's Navy describes every aspect the English navy in the second half of the seventeenth century, from the time when the Fleet Royal was taken into Parliamentary control after the defeat of Charles I, until the accession of William and Mary in 1689 when the long period of war with the Dutch came to an end. This is a crucial era which witnessed the creation of a permanent naval service, in essence the birth of the Royal Navy. Every aspect of the navy is covered - naval administration, ship types and shipbuilding, naval recruitment and crews, seamanship and gunnery, shipboard life, dockyards and bases, the foreign navies of the period, and the three major wars which were fought against the Dutch in the Channel and the North Sea. Samuel Pepys, whose thirty years of service did so much to replace the ad hoc processes of the past with systems for construction and administration, is one of the most significant players, and the navy which was, by 1690, ready for the 100 years of global struggle with the French owed much to his tireless work.This is a hugely significant book for historians, naval enthusiasts and for all those with an interest in Pepys and this colourful era of the seventeenth century, and a new affordable paperback edition will be widely welcomed.