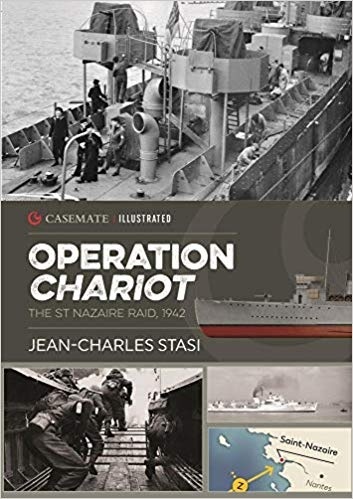 At the beginning of 1942, the Tirpitz, the heaviest battleship ever built by a European navy and sister ship of the Bismarck, was on the cusp of breaking out into the north Atlantic. The prospect of the huge German battleship patrolling the Atlantic posed a huge threat to the convoys that were the lifeline for an embattled Britain. Determined efforts were made to damage the ship through bombing raids: these failed. An altogether more daring and radical plan was conceived: destroy the dry-dock facility at St Nazaire on the French Atlantic coast, and without the use of the only suitable base for the ship, the threat would be neutralized.

The plan was to ram the entrance gates with a ship packed with explosives on a delayed fuse to give the men on board time to take shelter before the ship exploded. A motor boat armed with torpedoes would fire at the inner gate causing further damage to submarine pens. The troops and crew would then destroy as many dockyard targets as they could and withdraw in fast motor launches which had followed them in. All this was to be achieved under cover of an air raid. HMS Campbeltown, a US lend-lease destroyer was chosen for the task.

On the night of 27th March the raid commenced; heavy shelling killed or wounded over half of the motor boat crews in the approach but the Campbeltown succeeded in lodging its bows in the outer gates. On shore fighting was ferocious and close-quartered. The delayed action fuses detonated the high explosives in the Campbeltown's hold at noon on the 28th, killing over 400 German officers and men. The dock gates were destroyed and were not repaired until after the war. The cost to the Allies was high, of the 241 Commandos who took part, 168 were either killed or captured. But the Tirpitz was never able to leave Norwegian waters: the raid was an overwhelming success.

This volume in the Casemate Illustrated series gives a clear overview of the planning and execution of the raid and its aftermath, accompanied by 125 photographs and images, including color profiles and maps.