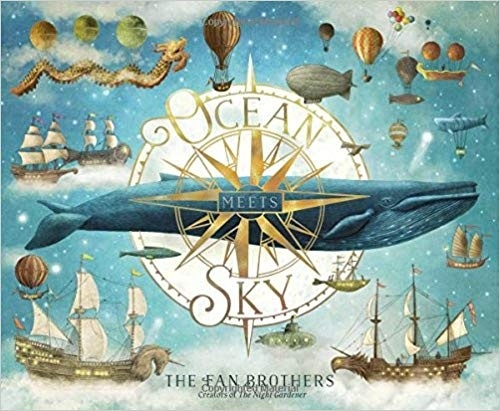 PreS-Gr 3The Fan brothers' elegant illustrations and understated yet emotion-packed storytelling create a picture book that is at once mystical, magical, and magnetic. Finn, a boy of Asian descent who lives by the sea, remembers the stories his grandfather told him about a faraway place "where ocean meets sky." Today would have been Grandpa's 90th birthday, and Finn honors him by building a boat for the journey they had planned together. After cobbling together driftwood, an old tire, window frames, and other discarded materials, he crawls inside the vessel for a short nap. When he awakens, the boat is at sea; but this is no ordinary voyage. A massive golden fish with a mustache and goatee agrees to lead Finn to the destination described in his grandfather's tales. After visiting several amazing locales (including the Library Islands, where "bookish birds" roost and read), the boat lifts skyward ("or had the water fallen away?"). Finn glides through eye-catching spreads filled with wonders from ocean and air (a magnificent mélange of giant whales, submarines, sailing ships, dirigibles, hot air balloons, and more) toward a full moon with a very familiar and much-longed-for face. Summoned home by his mother's call, Finn stands on the seashore, looks to the moon, and acknowledges that "It had been a good day for sailing." Rendered in graphite and colored digitally, the artwork masterfully blends realistic details with soaring flights of fancy. VERDICT This grand adventure stirs imaginations while also celebrating a loving intergenerational relationship and providing comfort and closure after loss. Readers will want to share this affecting title one-on-one, with plenty of time to pore over the gorgeous artwork.Joy Fleishhacker, Pikes Peak Library District, Colorado Springs