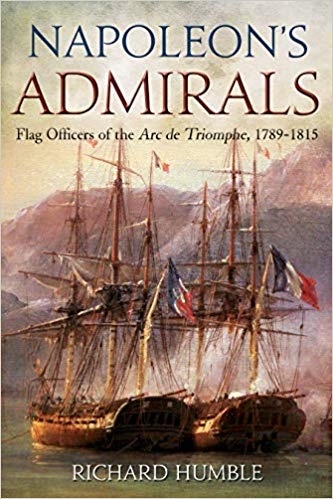 On the four sides of the Arc de Triomphe in Paris, serried tablets display the names of 660 honoured commanders of the Revolutionary and Napoleonic Wars. Most are those of generals and marshals of the French Army  but 26 are the names of admirals, commanders of the fleets of Republican and Napoleonic France. In Napoleon's Admirals, Richard Humble presents not only their individual stories, but an entirely new appraisal of the Anglo-French naval war of 17931814: the longest sea war in modern history, exploding many myths along the way. The aristocratic officers of the French Navy did not emigrate en masse when the Revolution came, leaving the Navy leaderless and doomed to repeated defeats at sea. Of the 26 Admirals of the Arc, 23 had learned their trade in the French royal and merchant navies of the Ancien Régime. Republican France could call on a wide range of seasoned combat veterans from the American Revolutionary War (177883), whose stories are a revelation in themselves. These former Kings officers stayed, and loyally tried to serve their country as the Revolution pursued its wasteful and unpredictable course. Three of them paid for their loyalty under the guillotine. Contrary to popular British belief, the naval war did not end with Nelsons victory at Trafalgar in October 1805. Thanks to an energetic warship-building program, the French Navy recovered quickly from Trafalgar, and Napoleons conquests created an ever-widening network of new French naval bases for the British Admiralty to cover. Collingwood, Nelsons deputy at Trafalgar, was still commanding in the Mediterranean four years later. The Admiralty had not dared to recall him and he died at sea, utterly exhausted, in March 1810. Four months later the French inflicted the greatest humiliation suffered by the Royal Navy in the entire naval war: the annihilation of an entire British frigate squadron in the battle of Grand-Port, Mauritius, in August 1810. In this account of the men who imposed such a strain on the worlds greatest navy for 21 years, Richard Humble has provided a remarkable addition to the well-worn pages of conventional naval history.