Hunting the Last Great Pirate: Benito de Soto and the Rape of the Morning Star 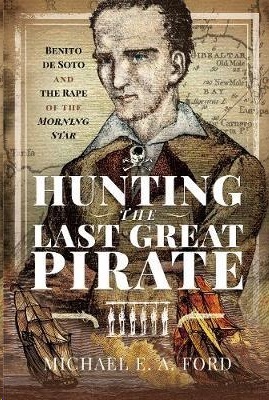 Hunting the Last Great Pirate: Benito de Soto and the Rape of the Morning Star

In 1827 the Duke of Wellington - former Commander-in-Chief of the British Army and British Prime Minister - ordered the withdrawal of British soldiers from the island of Ceylon after years of bloody conflict there. English cargo vessels, including the unarmed English Quaker ship _Morning Star_, were despatched to sail to Colombo to repatriate wounded British soldiers and a cargo of sealed crates containing captured treasure.

By January 1828 , _Morning Star _was anchored at Table Bay, Cape Town, before joining an armed British convoy of East Indiamen, heading north. Heavily-laden, she struggled to keep up with the ships ahead.

The notorious pirate Benito de Soto was the master of a heavily-armed pirate ship, lying in wait off Ascension Island in the mid-Atlantic to pick-off stragglers from passing convoys. _Morning Star_ was easily overhauled by the pirate and stopped with cannon fire. Her captain and officers were executed and the attackers fled to Spain with cargo stolen from the stricken ship.

Later de Soto buried the treasure and travelled to British-ruled Gibraltar with forged identity documents to sell the spoils. The authorities, however, discovered his identity and he was arrested. Despite the absence of eye-witness evidence that he was the pirate captain, he was convicted of piracy before a British judge and jury and hanged at Gibraltar in early 1830\. It is clear that proof of de Soto's guilt in court was lacking, but astonishingly, when renovations were being carried out at de Soto's former home village in Galicia, Spain, in 1926, much of the treasures he had plundered from _Morning Star_ were found buried in the grounds there.