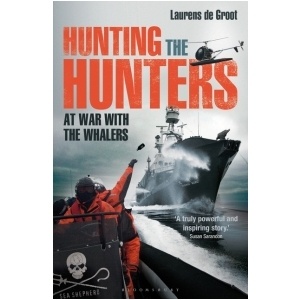 As the rest of the world stood by and watched, Laurens risked everything to defend these extraordinary mammals from extinction. A truly powerful and inspiring story.' Susan Sarandon

Laurens de Groot was a detective for the Dutch police, specializing in organized crime and environmental pollution. He was rapidly promoted through the ranks, but became increasingly disillusioned with failed prosecutions and minimal prison sentences. But although as a detective there was little he could do to stop the truly big criminals, there was a more radical option ? direct action, not necessarily within the law.

Laurens leaves his job, sells up, travels to Australia and joins Sea Shepherd, an international organization protecting marine wildlife. He soon finds himself in the middle of the war against the Japanese whaling fleet operating in the Antarctic whale sanctuary. As the Japanese hunt whales, Laurens and the Sea Shepherd crews hunt them. Their boats are tiny for the wild Southern Ocean, and as well as dealing with the extreme weather they are repeatedly attacked by the Japanese crews and nearly shipwrecked by ice. On one mission, their boat is rammed, cut in two and sunk by a whaling ship. This is war, with no quarter given.

Hunting the Hunters is an action-packed and timely account of one man?s extraordinary life, as well as an ongoing battle against a powerful nation determined to get its way no matter the cost. It?s an important subject, one that a lot of people care about, and as Laurens tells the story in his own words this is a compelling and insightful book.