How to Lose a War at Sea: Foolish Plans and Great Naval Blunders 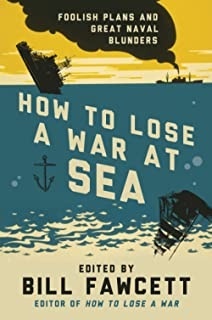 How to Lose a War at Sea: Foolish Plans and Great Naval Blunders

From the Spanish Armada to the modern age of aircraft carriers, history is littered with horribly bad military ideas on the open seas. Whether a result of lack of planning, miscalculations, a leader's ego, spy infiltration, or just a really stupid idea in the first place, each military defeat is fascinating to dissect. Among the catastrophic missteps: The French defeat of the British at the Battle of the Chesapeake, The rise of the American Navy during the Barbary Wars, The short life and death of Imperial Japan's Navy, The sinking of the Bismarck, Nazi megaship, Remember the Maine! How the Spanish-America War was started by lies, Admiral Nelson's greatest hits: The Nile and Trafalgar, The ANZAK disaster at Gallipoli, Germany's failed WWII campaign in the North Atlantic, Kennedy's quarantine of Cuba. With more than 35 chapters of incredible military disasters, both famous (infamous) and obscure, How to Lose a War at Sea is chock full of trivia, history, and fascinating looks at the world's greatest seafaring military defeats.