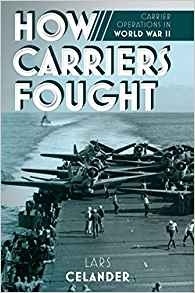 In November 1921 the first purpose-built carrier was launched by the Japanese, followed a year later by the British launch of the Hermes. After WWI, battlecruisers were readily converted into aircraft carriers, with questions on how to handle the aircraft on the flight deck beginning to be raised and techniques of how to attack enemy ships beginning to develop. How Carriers Fought focuses on the HOW, not the what, when, or the by whom. It begins by examining the tools and the building blocks of carrier operations, looking at what life was really like in the cockpit for the pilots alongside the technicalities of navigation and communication. A world of tactical dehydration, amphetamine pills, and illegal smoking is explored, as well as the measures they put in place to reduce their risk of death on being hit. This book goes on to examine the major carrier battles of WWII, from the Battle of the Coral Sea to the Battle of Leyte Gulf, with a focus on how the tools of carrier operations were employed during these battles. At the Battle of the Midway the debate of concentration vs. dispersion became relevant, as the Japanese decided to divide their forces while the Americans concentrated theirs. How Carriers Fought questions these tactics, exploring which worked best in theory and in practice. How were searches made, how many planes were used, what was the range and coverage of the search, and how many hits were scored and losses suffered? The final section of the book looks at how carrier operations changed in major ways during the course of the war, as better technology and a better understanding of this new type of warfare allowed for quick advances in how operations were carried out. For example, the balance between fighter and bomber planes changed dramatically, with the US beginning the war with 20% fighters and ending it with 80% fighters. This book gives a comprehensive insight into carrier operations in WWII, with a focus on the Pacific War between the US Navy and the Imperial Japanese Navy. A series of appendices expands on topics such as radar, landing on a carrier, radios and even carrier pigeons.