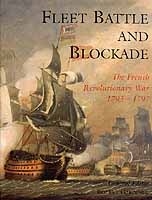 Forgetting the set backs of the American Revolutionary War, in 1973 the Royal Navy embarked on an almost unprecedented era of victories at sea, producing considerable appetite for pictures of every incident, great or small. Despite numerous defeats, the French navy continued to dispute command of the sea in the period 1793-1797, and the early years of the war abound with fleet engagements, including dramatic victories against the Spanish at St. Vincent and the Dutch at Camperdown, between which the navy endured the shocking events of the Great Mutiny, the most dangerous moment of the whole war.