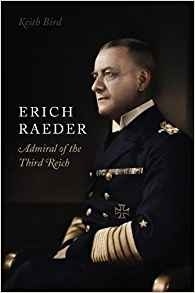 Erich Raeder led the German navy from 1928 to 1943, a period that included the last turbulent years of the Weimar Republic, the rise of Hitler, and World War II. Yet until now, no full-length biography has been written about this extraordinary naval figure. While most historians have viewed Raeder as a product of the Wilhelmian era and heir to Admiral von Tirpitzs sea power ideology, this work clearly demonstrates Raeders affinity with Hitlers fascism. Keith Bird refutes Admiral Raeders own argument that his navy was nonpolitical and independent; Bird shows him to be a political activist and the architect of German naval policy. Drawing on archival resources and the rich scholarship of German naval history over the past five decades, Bird examines the evolution of Raeders concept of naval strategy and his attempts to achieve the political and military means necessary to attain the navys global naval ambitions. He describes the admiral as ultimately being defeated by the contradictions in his own policies as well as Hitlers and by the realities of Germanys resources and military necessities. Here for the first time, Raeders strict leadership of the navy after 1928 and his relationship to Hitler and the National Socialist state are placed in the context of Raeders formative years as an Imperial naval officer, his World War I combat experience, and his critical role in the survival and development of the postwar Reichsmarine. The impact of Hitlers influence on both the pace and the nature of naval rearmament and the conduct of the Kriegsmarine in war are also examined here, as are Raeders furtive attempts to influence Germanys strategic thinking in favor of a maritime