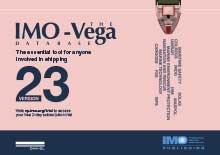 Once the purchase is complete, you will need to download the product on the required computer from www.imoactivate.com. In order to activate your product, submit the relevant details and the Advance Purchase Code supplied to receive your Activation Code which will give you access to the data.

Please note that each user licence may be used for one computer only. Multi-user licences benefit from a discount at point of purchase which is to be requested by order form or email.

The IMO-Vega Database is an essential tool for anyone involved in shipping: ship-owners and operators, shipbuilders, classification societies, casualty investigators, governments, insurers and underwriters, port authorities, surveyors and many others.

IMO-Vega, developed jointly by IMO and Det Norske Veritas (DNV), puts all the necessary information at your fingertips. Given year of build, ship type, ship size, cargo and trade area, IMO-Vega will quickly identify the requirements applicable to the ship in question.

Unlike other, similar products, IMO-Vega contains historical data including regulations which have been superseded. In the context of Port State Control, for example, access to the correct historical regulations is essential.

The database includes the latest texts (up to and including October 2018) of IMO requirements such as the following, but not limited to: