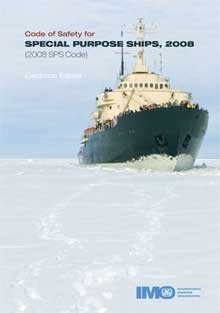 This IMO digital publication (e-reader) is in EBK format for use on a single computer/laptop with our Windows-based e-reader software, "The IMO Bookshelf". If your customer does not already have this software installed on their computer, it can be downloaded, free of charge here: www.imo.org/en/Publications/Pages/Bookshelf.aspx

It may print 10% of the text (approx. a chapter) at a time from a single title with a maximum of 75 pages per day across all titles (not pdf).

In adopting the 2008 SPS Code, the Committee recalled that, since the adoption of the previous SPS Code, many requirements of the SOLAS Convention had been amended and considerable experience had been gained in the Code's application, all of which were taken into account during the development of the new Code. Particular attention was paid to the matter of trainees on training ships which lead to a comprehensive revision of the term "special personnel".