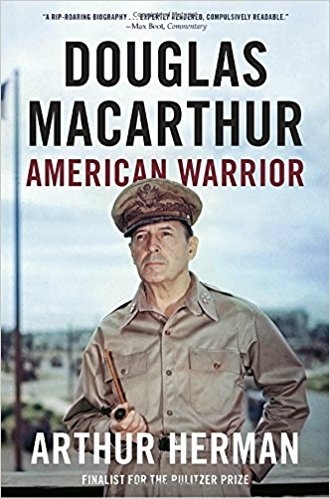 A new, definitive life of an American icon, the visionary general who led American forces through three wars and foresaw his nations great geopolitical shift toward the Pacific Rimfrom the Pulitzer Prize finalist and bestselling author of Gandhi & Churchill

Douglas MacArthur was arguably the last American public figure to be worshipped unreservedly as a national hero, the last military figure to conjure up the romantic stirrings once evoked by George Armstrong Custer and Robert E. Lee. But he was also one of Americas most divisive figures, a man whose entire career was steeped in controversy. Was he an avatar or an anachronism, a brilliant strategist or a vainglorious mountebank? Drawing on a wealth of new sources, Arthur Herman delivers a powerhouse biography that peels back the layers of mythboth good and badand exposes the marrow of the man beneath.

MacArthurs life spans the emergence of the United States Army as a global fighting force. Its history is to a great degree his story. The son of a Civil War hero, he led American troops in three monumental conflictsWorld War I, World War II, and the Korean War. Born four years after Little Bighorn, he died just as American forces began deploying in Vietnam. Hermans magisterial book spans the full arc of MacArthurs journey, from his elevation to major general at thirty-eight through his tenure as superintendent of West Point, field marshal of the Philippines, supreme ruler of postwar Japan, and beyond. More than any previous biographer, Herman shows how MacArthurs strategic vision helped shape several decades of U.S. foreign policy. Alone among his peers, he foresaw the shift away from Europe, becoming the prophet of Americas destiny in the Pacific Rim.

Here, too, is a vivid portrait of a man whose grandiose vision of his own destiny won him enemies as well as acolytes. MacArthur was one of the first military heroes to cultivate his own public personathe swashbuckling commander outfitted with Ray-Ban sunglasses, riding crop, and corncob pipe. Repeatedly spared from being killed in battlehis soldiers nicknamed him Bullet Proofhe had a strong sense of divine mission. Mac was a man possessed, in the words of one of his contemporaries, of a supreme and almost mystical faith that he could not fail. Yet when he did, it was on an epic scale. His willingness to defy both civilian and military authority was, Herman shows, a lifelong traitand it would become his undoing. Tellingly, MacArthur once observed, Sometimes it is the order one disobeys that makes one famous.

To capture the life of such an outsize figure in one volume is no small achievement. With Douglas MacArthur, Arthur Herman has set a new standard for untangling the legacy of this American legend.