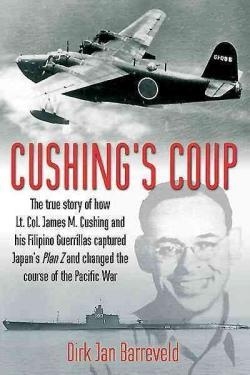 The True Story of How Lt. Col. James Cushing and His Filipino Guerrillas Captured a Japanese Admiral and Changed the Course of the Pacific War
This work reveals one of the most important intelligence triumphs of World War II. It was no less than the capture of Japans Plan Zthe Empires fully detailed strategy for prosecuting the last stages of the Pacific War. Its a story of happenstance, mayhem, and intrigue, and resulted directly in the spectacular U.S. victory in the Philippine Sea and MacArthurs early return to Manila, doubtless shortening WWII by months.

One night in April 1944, Admiral Koda (successor to Yamamoto), commander-in-chief of Japanese forces in the Pacific, took off in a seaplane to establish new headquarters. For security reasons he had his chief-of-staff, Rear Admiral Fukudome, fly in a separate seaplane. But both aircraft ran into a tremendous typhoon and were knocked out of the skies. Kodas plane crashed with the loss of all hands. Fukudomes crashlanded into the sea off Cebu, the Philippines, and both the admiral and the precious Japanese war plans floated ashore.

Lt. Col. James M. Cushing was an American mining engineer who happened to be in Cebu when war broke out in the Pacific. He soon took charge of the local guerrillas and became a legendary leader. But his most spectacular exploit came when he captured Admiral Fukudome and the Plan Z that was in his tow. The result was a ferocious cat-and-mouse game between Cushings guerrillas and the Japanese occupation forces. While Cushing desperately sent out messages to MacArthur to say what he had found, the Japanese scoured the entire countryside, killing hundreds of civilians in a full-scale attempt to retrieve their loss.

Cushing finally traded the admiral in return for a cessation of civilian deathsbut he still secretly retained the Japanese war plans. Naturally both Tokyo and Washington tried to cover up what was happening at the timeneither wanted the other to know what theyd lost, or what theyd found. However, in this book we finally learn of the huge intelligence coup by Lt. Col. Cushing that helped to shorten the entire war.