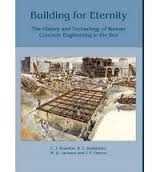 One marker of the majesty of ancient Rome is its surviving architectural legacy, the stunning remains of which are scattered throughout the circum-Mediterranean landscape. Surprisingly, one truly remarkable aspect of this heritage remains relatively unknown. There exists beneath the waters of the Mediterranean the physical remnants of a vast maritime infrastructure that sustained and connected the western worlds first global empire and economy. The key to this incredible accomplishment and to the survival of structures in the hostile environment of the sea for two thousand years was maritime concrete, a building material invented and then employed by Roman builders on a grand scale to construct harbor installations anywhere they were needed, rather than only in locations with advantageous geography or topography.
This book explains how the Romans built so successfully in the sea with their new invention. The story is a stimulating mix of archaeological, geological, historical and chemical research, with relevance to both ancient and modern technology. It also breaks new ground in bridging the gap between science and the humanities by integrating analytical materials science, history, and archaeology, along with underwater exploration. The book will be of interest to anyone interested in Roman architecture and engineering, and it will hold special interest for geologists and mineralogists studying the material characteristics of pyroclastic volcanic rocks and their alteration in seawater brines. The demonstrable durability and longevity of Roman maritime concrete structures may be of special interest to engineers working on cementing materials appropriate for the long-term storage of hazardous substances such as radioactive waste.